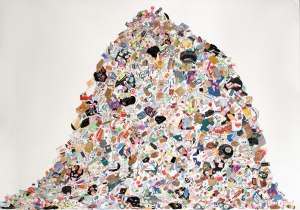 Nothing seemed to fit together. Sifting through piles of wreckage here was like looking into the lives of people, but people who lived in very different areas and times. Piles of the disposed remains of numerous civilizations painted the landscape. Looking to the horizon showed the mountains that waste created. In one hand, a doll, the plastic melted away on one side, and in the other hand, tattered pages of a book. The writing was illegible, but in his hands could be a few pages of the greatest book ever written. Or perhaps it is an excerpt from a treaty that changed the face of the world. Or maybe it is just trash.

The Origin Mounds was an area that covered hundreds of miles. They were the piled remains of civilizations past. They spanned so much space and reached so high, it was impossible to tell when one people’s garbage began and when another ended. At one point, each of those people called this world “home”.

The planet the Mounds are found on is said to be almost 6 billion years old, and life, in some fashion, has apparently lived on it for much of this time. We are the current residents. We do not know for sure how many dominant species were before us. The Mounds were thought to be the key. Digging through, layer by layer we thought that it would reveal a timeline we could follow. We yearned to know of those who called this planet home before us. However, there was no logic to how the Mounds were constructed. Something of one design is on the surface, and something of near identical design is at the bottom. There is no way to determine a timeline from the Mounds. That venture has long been deemed unworthy of resources. This area is a place to scavenge now. Feeding off the remains of civilizations, history is not a concern, only the next day is.

My name is Andor, and I am amongst those who are ignorant to those who came before. My people are not indigenous to this world, but many of us cannot remember a time when we were not here. The discovery of this world saved us more than we felt worthy of. The planet’s atmosphere was thick with toxins, and much of the land was inhospitable, hostile, or the Mounds. However difficult it was though, we could survive here on this planet.

Can you imagine how vast space is? Even just one galaxy, ignore all that is beyond its borders. Even this is something impossible for us to traverse with the technology we have. However, this is what we had to do, when we left our home world. The remains of my people were stuck with the impossible task of finding a planet we could live on. And harder still, living long enough to reach it. Travelling amongst the stars is terribly poetic, but it is slow, and unforgiving. If there is an issue during your yearlong journeys, there is no place to stop for help. There is no place to stop to stretch your legs. There is only the emptiness and the hopeless task our body has given us: survive till tomorrow.

So you may understand now. Despite the difficulties with this planet, it was in reach, and its land was survivable. That was all we needed. We were now able to complete the once hopeless task of surviving. We would not be like the civilizations preserved poorly in the Mounds. We would live on to see all that the cosmos had to offer. Our people were forced to choose survival over exploration, but when we were strong again, we would continue to grow.

We have not been “strong” for almost a century now. Many of those original passengers on our star ships are gone now, and with them, our people’s origin. They were in the Mounds now. We lived on for now, but we were already buried alongside societies long gone. We were adding to history.

Though not native to this world, we were a part of it now. Is that enough to call this place home? Is having our people buried alongside the natives enough? My generation is at an odd place. This planet is all I know. I was never in the great ships we used to flee our dying home world. I have never even seen them. They were taken apart during colonization. I have not seen my people’s home world, the ships we took to leave it, and thus all I know is this toxic world. And I barely know it at all.

So where is my home? My people did not grow here, but I did. Does that make this world my home just as much as those people who came before me? If the long dead native societies of this planet saw me and heard my story, would they welcome me? Or am I just an invader?

But they are gone, and their planet is mine. Whether they would agree or not is irrelevant. I live amongst their civilizations remains. Being amongst so many failed societies makes me realize that where your home is doesn’t matter. In the end, we all end up in the same place. “Native” is irrelevant. This is where I am, and this is where I must stay. Welcome me or not, but I am your neighbor.

This world had no dominant species when we arrived, who is to say that it was not waiting for us? It may be toxic to someone else’s eyes, but to us, it was a godsend.

Our time here has been short, but essential. We have learned that home is not where your heart is or where your roots come from. Home is where you can survive.

Sloth just trying to lounge his way through the world. View all posts by Alexander Condie

In 2029 my glasses will be paisley too #tenyearchallenge #2009vs2019
Guess who's featured? Me!!! Read my story here: http://dailysciencefiction.com/science-fiction/robots-and-computers/alexander-condie/empire-of-the-moment #scifi #writer #pulitzerprize
🖤🐱🖤 . . . #catsofinstagram #catdad
Canisbay lake, meet my booty shorts #gayboy #beach